Mommy and Me Leggings and now Doll leggings too!

Introducing new dolly leggings to fit your dolls and stuffies!  Per a request, I tried some doll leggings. Oh my goodness they are so tiny and oh so adorable!  My daughter loves matching her stuffed owl!

Mommy and Me Leggings in Double Brushed Poly in Navy Paisley


I just finished these  Navy and White Paisley Mommy and Me Leggings for a customer!  They are incredibly soft made with CPSC certified double brushed polyester.  What do you think?  Do you love the colors?  Well I am off to make another pair for another customer!  Hurry and get yourself a pair before they sell out!
Posted by Seams Sew Lo at 11:00 AM No comments:

Win a Sparkle Dress by helping us pick a name for our Sparkle Collection. #contest #giveaway


Contest! Contest! Contest!  Oh, how we love a contest.  Please help us to give Giggle Poo's Sparkle Collection a new fabulous name!  We need your creative juices for this one.  All you have do is comment a name or several awesome names on Giggle Poo's Facebook Page or Giggle Poo's Instagram to enter.  Did I mention there is a HUGE sale!  The first 10 dresses sold in each color will be 45% off.  Yes that's right, 45% off, our biggest sale ever!!

Please help us pick a better name than the Sparkle Collection for our shimmering dresses and leggings, by posting a name or names on Giggle Poo's Facebook page or instagram account. Please feel free to post as many names as you like. If the same name is posted by more that one person, the name will go by the first person that posted that name, per Facebook time stamp. International entries are also welcome! We will pick 3 of our favorite names on September 13th and the public will vote on the 3 names from September 14th through 16th. The winner will win a free Giggle Poo sparkle dress or $25 gift card to Etsy, winner's choice. The 45% off sale is only for the first 10 dresses sold in each color, so act fast! This promotion is in no way affiliated with Facebook. Good luck! Please share this post!
Posted by Seams Sew Lo at 6:46 AM No comments: 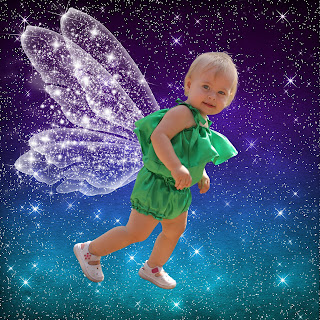 We are planning to take a trip to Disney World soon.   SHHH!  Don't tell Little Dude, he does not know yet.   I was thinking of what outfits I could make for my littles.  I really liked the idea of a Tinkerbell inspired costume for baby girl, however all I could find were dresses.  Baby girl is a climber and a doer and a dress typically gets in the way.  Then I had the opportunity to test this Sun-kissed Sunsuit by Bella Sunshine Designs.

I was looking through all my fabric (my husbands thinks I have too much, I think he's silly) and I came across these green remnants I had purchased.  The Bella Sunshine Sun-kissed Sunsuit and this perfectly green fabric was perfect for a Tinkerbell inspired romper.  Baby girl will be able to move and enjoy her time.

The Sun-kissed sunsuit can be made into a maxi-dress and can be made with or without a ruffle.  The shorts on this romper are so cute with the bubble effect and the bottom ruffle.  Love!!  The pattern is pretty simple to follow.  I learned a new skill of understitching with this pattern.  I will work on an understitching tutorial soon.  I love how the pattern is in layers and I can print off only the size I need.  Baby girl is 15 months old weighing 23lbs wearing the 12 month size.  If you do not want to make one yourself, please feel free to reach out to Giggle Poo.  We would be happy to help make one for you.

Fever with no symptoms, it might be Hand Foot Mouth Disease

I picked up Little Dude from preschool yesterday and the teacher mentioned he was saying he was cold.  He looked pale and tired.  I got him home and he had a fever of 102 without any other symptoms.  He fell asleep in the middle of the living room floor, which is completely unlike him.  I looked up the Children's Tylenol dosage chart and gave him some Tylenol and that brought down his fever a little bit.  Not even an hour after the time of the next possible Tylenol dose, his fever shot back up, so we gave him some more.  He even told me, "Mom, I think my fever came back." and he was right.  He went to bed shortly after and woke up this morning with a 99.7 fever, so I didn't give him anything.

I looked in his mouth a few times and didn't see anything, as a few people mentioned it could be Hand, Foot, Mouth disease.  Then after lunch, he still was not himself and he came over to sit on my lap and that is when I saw the red bumps on his wrist and hand.

Then I asked him to look at his feet and sure enough his feet were also covered in little red bumps.

After I saw the rash on his hands and feet, I had an idea that it might be hand foot disease, so I brought him over to the window and took a look inside and there were the red bumps on the roof of his mouth.  Yep, HFM!  Poor guy!

Poor Little Dude, those bumps look like they hurt!  I feel bad because last night he told me it hurt to eat or drink.  I thought he just had a sore throat.  I feel like this rash came out of nowhere too.  I had already checked his mouth twice today.  Maybe I wasn't looking in the right places, but boom there they were all of a sudden.  It is apparently highly contagious and can still spread through saliva and feces for weeks even after the child has no more signs of the virus.  I am still researching if the blister fluid from the hand foot mouth rash is contagious.  Some websites say yes and some say no.  I will do some more research for now.  For now, its will be lots of pedialite popsicles and cold drinks.  Also, lots of hope that baby girl doesn't get it as well.  She loves her brother so much, I think its doubtful she will not catch it.  Fingers crossed.  Please tell me your experience with Hand Foot Mouth.  Any great home remedies??

Update:  Little Dude started his fever on Thursday afternoon and today is Monday, he is doing so much better already.  His rash is starting to fade and his fever only lasted a the day.  However, he passed it on to his 15 month old sister.  She has had a much harder time fighting this virus.  Baby girl's fever lasted two days and last night she only slept for two hours, not consecutive.  Her feet were extremely hot and were causing her a lot of pain.  The pediatrician wanted to see her today since she is so young.  Her poor little feet are swollen.  They have suggested cold compresses and ibuprofen.  (Please consult your own Dr. for any medical advice).  I thought the hand foot mouth rash on her feet were causing her feet to itch, however they said its most likely the inflammation of the lesions causing her feet to have a burning sensation.  It make sense why the Benadryl we tried last night did nothing for her. 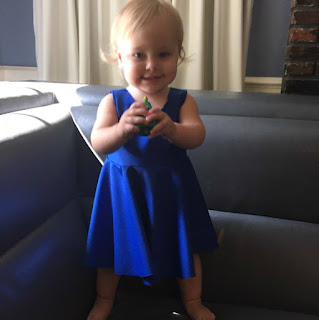 The other morning I had this wonderful idea of mashing up two patterns together while feeding the kids breakfast. I have had this gorgeous royal blue scuba knit fabric for a couple of weeks, trying to decide what to make with it.

While baby girl napped, I whipped this little dress up and baby girl loved it!! She loved jumping up and down on the couch in this blue scuba dress. It's really nice to see a girl in different color than pink.

When the hubby came home, he asked, "Are we going somewhere fancy?" when he saw her in her new scuba dress. So, I have decided to name the dress "Somewhere Fancy". Lol. Be on the lookout for this Royal Blue Scuba Dress to be available and sound off below with other color ideas for the dress!

I had the pleasure of testing these adorable Bubbla Shorts pattern from The Eli Monster in a 12 month size.  Baby girl fit them perfectly!

The Bubbla shorts pdf pattern were a very quick easy sew too.  You just need a 1/2 yard of fabric and some elastic.  It is even a great starter pattern for a beginner.  I get so many complements when she wears a pair.  They even have a cute bubble look from the back.


I found this navy and silver anchor fabric and I knew a had to make a pair of the Bubbla shorts with them.  I already had a navy body suit in stock and added this cute anchor design with waves embroidery design by Embroidery Monkey.  I also made a cute shabby flower by Sew Lucky Designs with my embroidery machine with extra scraps.  Its a quick sew with the embroidery machine.  Then takes a few snips with the scissors. I then douse the shabby flower in water, then throw it in the dryer and Voila! its all done.


I like to take fun pictures of my little ones, so I decided to remove all the books from my son's boat bookcase and threw baby girl in it.....


She gave me some really cute faces, so I had to add a shark to the photo...

These Bubbla Shorts are also play approved.  She was able to move well in them.  Oh no, baby girl, don't go overboard!!!